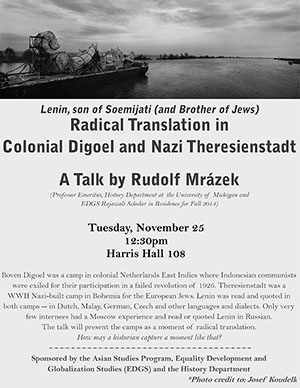 Lenin, son of Soemijati (and Brother of Jews)
Radical Translation in Colonial Digoel and Nazi Theresienstadt

Boven Digoel was a camp in colonial Netherlands East Indies where Indonesian communists were exiled for their participation in a failed revolution of 1926. Theresienstadt was a WWII Nazi-built camp in Bohemia for the European Jews. Lenin was read and quoted in both camps — in Dutch, Malay, German, Czech and other languages and dialects. Only very few internees had a Moscow experience and read or quoted Lenin in Russian. The talk will present the camps as a moment of radical translation. How may a historian capture a moment like that?