On February 6 2013, EDGS co-sponsored a roundtable with the Institute for the Study of Islamic Thought in Africa (ISITA) on “Radical Islamic Movements in Africa: Local Contexts, Transnational Connections.” Addressing a large crowd at the Program of African Studies, six experts discussed recent developments in North, Sahelian, and eastern Africa, with an added perspective from Indonesia. 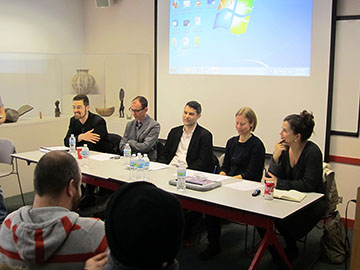 The presentations on Mali andNigeria described armed Islamist groups acting in direct opposition to the state, albeit a collapsed state in the Malian case. Benjamin Soares, Senior Researcher at the African Studies Centre, Leiden, contextualized the seemingly rapid domination of Mali’s northern region by armed Islamist groups in 2012 by describing trends over the past decade or more including rampant government corruption, collapse of state services, and growing poverty for most Malians, alongside increasing criminal activities in the north (kidnapping and smuggling) that enriched certain sectors of Malian society. With the state providing little tangible support to ordinary people in the north, religious organizations and leaders have filled the void. Funding from the Arab world for mosques, schools, and scholarships for Malian students to study in the Arab world has had an impact on religious ideas in the north. Members of Al Qaeda in the Islamic Maghreb (AQIM) have been operating  and establishing networks in northern Mali since at least 2003, and Soares indicated that there was receptivity in some areas—particularly Gao—to Islamist ideas well before 2012. All of this suggests that to characterize the Islamist occupation of Mali’s north as simply the recent imposition of “external, extremist” Islamist elements on the local population oversimplifies the complex composition and historical antecedents of the various Islamist groups operating in the north including: 1) AQIM, made up mostly of non-Malians; 2) the more Malian-based Ançar Dine; and 3) the Movement for Oneness and Jihad in West Africa (MUJAO), a semi-autonomous franchise of AQIM operating out of Gao with some West African leaders, but also recruits from elsewhere. Soares also briefly described some prominent Muslim leaders in southern Mali, some of whom could be characterized as Islamist, but who have supported the French intervention. These leaders will be influential in negotiating whatever political dispensation follows.

Alexander Thurston, PhD candidate in Northwestern’s department of religious studies, traced the evolution of the Islamist group Boko Haram from its emergence out of the fragmentation of Northern Nigeria’s Salafi field in the mid-1990s, to its current position as a formidable opponent of the Nigerian state. Boko Haram’s charismatic founding leader Mohammed Yusuf drew support primarily from young males in northeastern Nigeria to form a movement with two main tenets: first, that it is religiously forbidden to participate in Western-style education; and second, that Muslims should not work for the Nigerian government. Violent clashes between group members and Nigerian security forces in 2009 resulted in Yusuf’s death in police custody and the dialectic of violence between Boko Haram and Nigerian authorities began. Under new leader Abubakar Shekau, Boko Haram has launched guerilla style attacks against government offices, security agencies, elected officials and local leaders (including hereditary Muslim rulers), banks, mosques, churches, and schools.  Thurston’s concluding questions included: What are the prospects for dialog to end the violence and who could serve as a credible mediator? Will the splinter groups emerging from Boko Haram pursue a more international agenda? What are the connections, if any, between Boko Haram and AQIM? How will Boko Haram’s activities impact the Muslim community in Northern Nigeria—for example, the status and prestige of hereditary Muslim leaders, Sufi orders, or other Salafi groups? What drives the group? While some have suggested poverty and disenfranchisement as the root motivator for the attacks, Thurston urged that we continue to seek a more complicated model.

A common feature of the Libyan and Somalian situations is the overlap between the state and Islamist groups, making it difficult for fragile transitional governments to control the activities of such groups and thwarting the effectiveness of counter-insurgency strategies. Claudia Gazzini, Senior Analyst with the International Crisis Group, noted that in the Libyan case, “Islamist armed groups are not ‘the other’; they are within from the point of view of the state.” Following the 2011 revolution, the National Transitional Council incorporated existing armed groups into the security apparatus to help impose order in the power vacuum. While this may have been expedient to establish order immediately following the revolution, it is not a stable long-term solution. Over the past year the destruction of Sufi shrines and targeted assassinations have taken place with the support of state security forces, and Islamist armed groups have infiltrated Libya’s very weak border control unit. In addition, there are Islamist groups operating outside of the state, including Ansar Sharia, which provides assistance to local populations but also operates as an armed brigade; and Al-Qaeda-linked groups in mountainous areas. The Libyan government’s inability to control Islamist armed groups and secure its borders has regional implications. Weapons, people, and goods continue to cross Libya’s borders, especially in the south, and certain areas risk becoming safe havens for Islamist activities. The government’s challenges in the upcoming months include: establishing credible border security; building state security forces; addressing growing dissatisfaction towards the central government and the constitutional process; effectively negotiating communal conflicts; and controlling the spill-over effect from the international invasion of Mali. 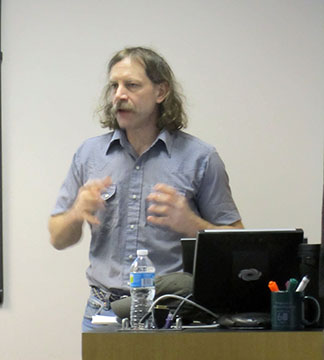 Will Reno, professor of political science at Northwestern, discussed the Somali case, where the boundary between the state and radical Islamist groups may be less clear than in Libya. Through a series of vignettes from Mogadishu, Reno demonstrated how challenging it is—for foreign observers or ordinary Somalians—to discern motive or connections in the chaos of events propelled by actors who may be playing all sides in the larger arena of Somali politics. While observers are quick to attribute guerilla-style attacks—such as that on the Prime Minister’s compound in January—to militant Islamist group Al Shabaab, Reno asserted that Al Shabaab is better understood as a brand name—it exists, but one must examine the multiple uses for armed groups at various levels.  “Has Shabaab infiltrated the government,” queried Reno, “or has the government infiltrated Shabaab?  That is the really interesting question.”  What Reno called the “strong undertow of localism” makes Somalia difficult terrain for Islamic internationalists, who struggle to create social space and develop their own ideas and organization. And it has consequences for international counter- insurgency efforts. In Reno’s opinion, “Somalia is the worst place in world to do counter-insurgency: we can’t tell who is ‘good’ or ‘bad.’” Rather than continuing to speak about the state as if it heads a government, as some foreign government officials do, Reno suggested that observers seek to understand how the bureaucracy of the state functions in a profoundly stateless area.

In the presentations on Kenya and Indonesia the focus shifted away from Islamist armed groups and onto Muslim groups with a non-violent agenda seeking political representation or implementation of an agenda (such as adoption of sharia) within the framework of a secular state. Rachel Riedl, assistant professor of political science at Northwestern, described the efforts of Kenya’s minority Muslim population to increase political representation over the past decade. Far from pursuing an Islamist agenda, certain sectors of the Muslim population have been working within the framework of the state to address core economic and political grievances. Kenyan Muslims, however, are divided along ethnic and internal religious lines. At the top of the hierarchy are coastal Muslims of Swahili descent who have focused on constitutional reform, particularly to protect their right to use khadis courts for family law cases. Ethnic Somalis in the northeast, the other major Muslim population, are viewed with suspicion by the government and many Kenyans; as a result, they are marginalized and unconnected to the broader Muslim political agenda. The regional and trans-national Islamist element only complicates the picture.  Al Shabaab has launched violent attacks in Kenya in retaliation for Kenya’s participation in the joint military mission in Somalia, in turn provoking domestic backlash against Kenyan citizens who are ethnically Somali. Riedl noted that trans-national Islamist threats create problems for the government, but also opportunities to pass on problems the government is unable to take care of by creating scapegoats. In this context, intra-religious tensions in Kenya have risen sharply and some of the earlier alliances between Muslims and Christians have now broken down. Moderate religious leaders who attempt to promote dialog and condemn violence are hampered by the international and trans-regional security context. Riedl’s presentation illustrated how regional and transnational politics affect domestic understandings of religion, which in turn influences how religious groups engage in domestic politics. 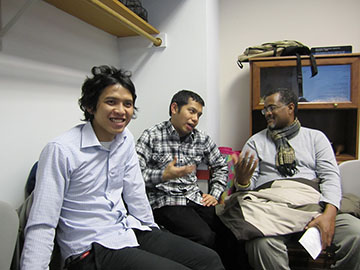 Michael Buehler, assistant professor of political science at Northern Illinois University, examined how the interaction of religious and secular forces in the context of democratization has resulted in the adoption of sharia in certain Indonesian provinces since 1998. The first Indonesian constitution (1945) established a secular state, but locally-based Islamic groups continued to fight to implement sharia for over a decade (known as the Darul Islam rebellion, 1949-62). Suharto’s New Order dictatorship (1965-98) repressed political Islam, but with the regime’s collapse and the advent of democracy, Islamic interest groups have resurfaced in three main forms: 1) official Islamic political parties; 2) locally based Islamist groups with no interest in taking part in politics; and 3) groups with a violent agenda that have targeted Westerners and state institutions. While all three groups have called for sharia implementation, only the local Islamist movements have succeeded in bringing it about. These groups’ deeply rooted networks—traceable to the same groups that led the Darul Islam rebellion—are valuable to politicians in the new context of democracy, providing the political capital that Indonesia’s poorly institutionalized political parties cannot. Buehler concluded by noting that we must differentiate between political structures that allow groups to mobilize (such as political parties, which in Indonesia are useless to politicians) and opportunity structures that allow Islamist movements to influence politics. He also urged observers of radical Islamic groups to remain attentive to the ways that secular and religious forces interact with rather than simply oppose each other, and the ways that the state mediates the influence of Islamist groups.

Rebecca Shereikis
Institute for the Study of Islamic Thought in Africa