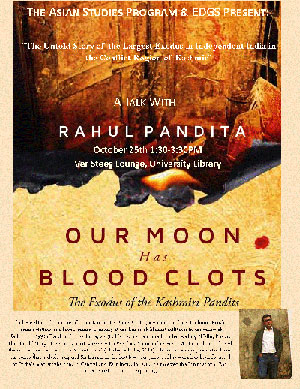 Rahul Pandita is the author of Our Moon has Blood Clots (Random House India, 2013), a memoir of how Kashmiri Pandits became victims of a brutal ethnic cleansing at the hands of Islamist militants in the valley of Kashmir in 1990. He is also the author of the best-selling Hello, Bastar: The Untold Story of India’s Maoist Movement (Westland/Tranquebar Press, 2011), and the coauthor of the critically-acclaimed The Absent State (Hachette India, 2010). He has reported from various war zones, including Iraq and Sri Lanka. In 2010, he received the International Red Cross award for conflict reporting.

The word “Kashmir” conjures up many images – heavenly natural beauty, an ancient culture of learning and spirituality, a cause of war between India and Pakistan, terrorism, a potential nuclear flashpoint – the list goes on. The long history of this fabled valley bears witness to many upheavals. One of those recent upheavals, however, has gone largely untold and even denied. But no history is mute.

In the winter of 1989-90, an Islamist insurgency broke out in the valley of Kashmir. It is the only state in India where Muslims are in a majority. The first onslaught of the subsequent violence was perpetrated upon the minority Hindus, known popularly as the Kashmiri Pandits. In the next few months, hundreds of them were murdered – inside their homes, on the streets, in their workplaces – leading to the exodus of the entire community of about 350,000 people. Almost a quarter of a century later, they are still in exile, having been driven out of the land where their ancestors had lived for thousands of years. Their tragedy still remains unacknowledged.

It is generally accepted that the Islamist militants were financed, armed, and trained by the Pakistani establishment. However, could foreign jihadis have terrorized a peaceful minority, and caused their exodus, entirely on their own? Or, did substantial numbers from the majority Muslim community take part in the brutalization? Did significant sections of the Muslim middle-class support the Pakistan-sponsored secessionist movement and communalization in which the Pandits were seen as obstacles? Are they complicit in the cleansing of the Kashmiri Pandits? Did the government of India fail its primary duty to protect its law-abiding citizens? Who is accountable for this enormous loss – human, financial, emotional and cultural? These questions are inconvenient and have, therefore, been largely ignored. It would be a crime to consign this exodus, and its reverberations, to the margins of history.